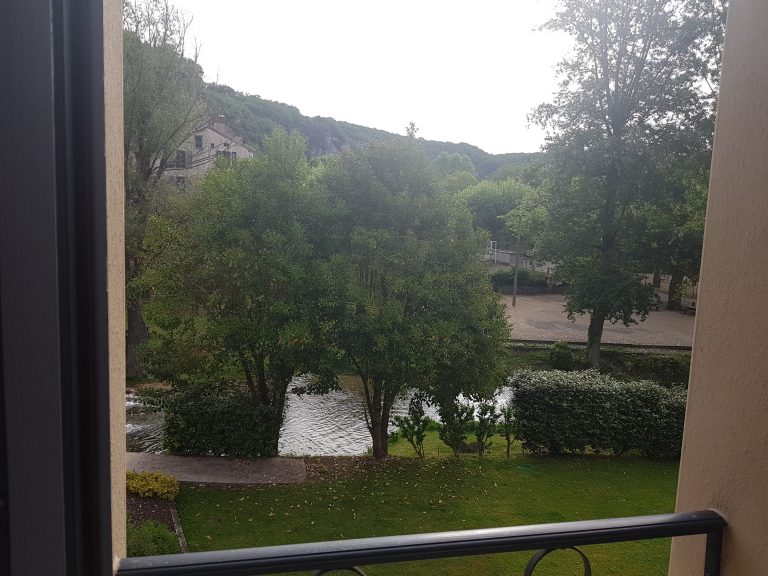 Two American couples ate breakfast at the next table. We introduced ourselves We introduced ourselves and had a brief conversation. One of them recognized me from the Facebook group. Breakfast was great and at nine o’clock we left the hotel and crossed the bridge. Yesterday’s decision not to climb back on the same route remained unchanged. We started walking along the side of the road towards Arcambal. A moderate ascend of about half an hour and we met with the trail. Two older women with impressive backpacks came from around the corner. Unlike us, they took the GR651 and climbed the mountain. Together we followed the path that went down towards the valley and then up and up…  . Somewhere along the way we were immersed in conversation and did not notice the disappearance of the red/white mark. Luckily for us, the two women who were walking not far behind us called us and pointed in the right direction.No doubt they saved us a long walk in the wrong direction. It was raining when we arrived to Arcambal. A small village just above the Lot. The GR36 sign disappeared and it took the four of us a few moments to find it. The women decided to stay for coffee in a small bar and we made a decision that later turned out to be wrong (when we discovered that there was no food source on the way to the city) and we went on.

From here the walk towards Cahors is by the side of the river. Sometimes the water is seen, sometimes corn fields or tall water plants conceal the water and the slow, hypnotic movement. Along the way, as in the previous days, trees whose names I do not know  scatter delicate white wool particles. Everything seems to be covered with cotton wool – the road, the fields, and us. A huge bridge passes over the river and a noise we have already forgotten – the noise of traffic – floods and conquers the space. We pass under the bridge. A field is divided into small squares, in each one as in a painting, different colorful growths. These are personal plots and it is interesting to see how varied they are. … Suddenly a sharp movement-a deer leaps just beyond the hedge that separates us. Jumping and running, delicate and precise, and in a moment it disappeared into the tall grass. With the disappearance of the deer, the path changes shape and becomes narrow and winding under a green tunnel of trees.This is a magical walk in a greenish world. Sometimes there is a river on one side, and on the other, a pond with frogs croaking in it.

By midday I was starving but there was nothing along the river. The village that appeared was also on the other side. Having no choice, we sat down on a small dam on the side of the trail and ate some nuts and cranberries. Two hours later we reached the outskirts of Cahors. This time it was clear that this was a big city and the map showed that our hotel was just across the hill. Cahors was once an early centre for banking and was synonymous with the sin of usury (lending money with interest) and referenced in Dante’s Inferno in his explanation of sins punished in the seventh circle of hell along with blasphemers:

And for this reason doth the smallest round
Seal with its signet Sodom and Cahors
And who, disdaining God, speaks from the heart

(From the site France today’)

We crossed the river, began to advance to the old area. It started pouring down just as we arrived to Saint Etienne Cathedral. It was half past three and we had great hopes of eating something. But next to the cathedral everything was closed so we decided to skip lunch and entered . The cathedral is listed as a UNESCO World Heritage site, and is part of the Santiago de Compestela pilgrimage route. The building,  with Romanesque and Gothic architecture, is most impressive from the outside and beautiful from the inside.The nave is covered by two domes, supported by six huge pilasters . One of the domes is decorated with frescoes (fourteenth century) depicting the stoning of St Stephen as well as eight prophets, each riding an animal . We couldn’t take our eyes from the beautiful dome and spend a long time before going out to the marvelous Gothic-style cloister (1504).

From our room in the amazing Best western Cahors Divona  we could enjoy the Lot and the famouse bridge. Built in the 14th C, with three fortified towers, the bridge adds beauty to the river. Local legend says that the devil (whose small figure sits on one of the towers) made an alliance with the builder of the bridge. The Devil promised to use his skills and in return was suppose to get the builder’s soul. The bridge was built on time and the builder regretted his promise. His final order sent the devil to collect water for the other workers using a sieve. In revenge for having been tricked, the Devil sends a demon each night to loosen the final stone in the central tower (known as the Devil’s Tower) to ensure that the bridge is never finished and must be repaired each day.

A funny surprise awaited us as we left the elevator dressed in bathrobes on our way to the spa -the American couples we met in our hotel in the morning just arrived .

Dinner on the terrace overlooking the bridge and the river was a perfect ending to the day. Our detour through the Cele valley was a great choice and tomorrow we will return to the main route and folow once again the GR65.