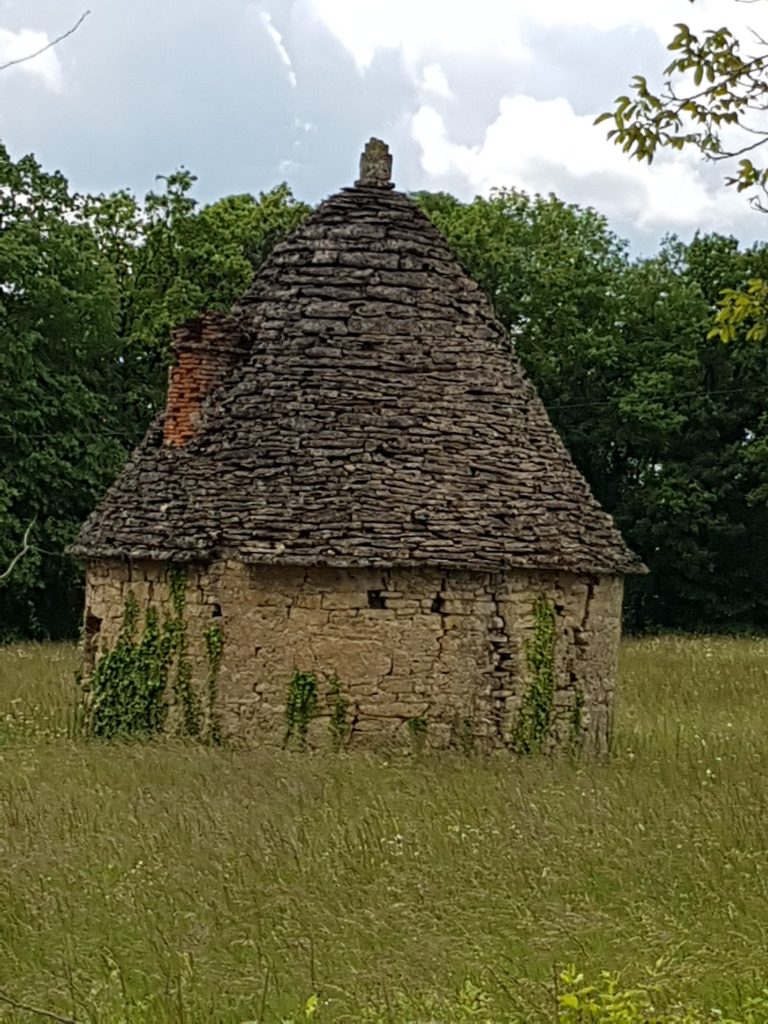 We waked up early, ate a lot of delicious things that Jacky prepared. It was our second day on the camino and at half past eight we were ready to start walking the 19 kilometers that separate between Montredon to Figeac. Last glance at La Mariotte, we parted from the other guests in the hope to meet in Figeac, and followed the road. Soon it became a very muddy path that went up and down hills. The weather was cool and sunny. A quarter of an hour passed when a few hundred yards away from us, on a tall tree, appeared a conspicuous white shape. Quickly we took out the binoculars. For once we were not lazy and put it into the backpack this morning  -and we saw a beautiful barn owl. She posed her beauty and then flew and left us excited.

The path makes a detour around fields. It was surprising to see relatively many hikers on the GR65. Maybe it it had to do with some national holiday, or maybe it was this part of the Camino . However, it turns out that we passed more people in the morning than we would meet from here to Auvillar. It was a kind of puzzle to understand where they had suddenly come from and where they had disappeared. We did not see most of them later on the Camino. An hour and a half later we were surrounded by green hills, white and yellow blooming , and greenish ponds with yellow iris on the banks. It felt like heaven.

If I’m not mistaken it was after we passed the village of Bord that the path  went down toward a lake. On the far side stood a car with two men nearby , on our side of the bank we saw a man watching. For a moment it seemed that we were in a scene from the classic film ‘the enemy of the state’ and we couldn’t resist playing with imaginary scripts. The closer we got to the village  of Saint Felix, the more hungry I became. The ten kilometers we walked made me dream of beer and a hot dish. We entered the village. It looked closed and deserted. Then, a window was opened and from it waved a masculine hand and gestured toward the next bar. We climbed a few steps and reached a lively place. It seems that all the people on the Camino have now been gathering in the same place, and the workers of the local council have joined the gathering. A glace of beer and a dish of chips and veal fulfilled all expectations. Half an hour later we were back on the path and the sun shone brightly.

The next two kilometers towards Saint Jean Mirabel were a moderate but long climb along a main road. Many of the restaurant’s diners marched behind us and in front of us. Doron walked fast as I trudged slowly and thought that maybe a beer at noon was not the best idea. Happily, at the end of every climb there is a descent. Indeed, the descent through a shady forest led us to Figeac. It was quarter to four and walking a few hundred meters on the hot asphalt after the 19 kilometers we already walked today was upsetting , but the road soon led us to the bridge and across the Lot. We easily found Hotel le quatorze, just near the cathedral and checked in.

Figeac is a medieval city located on the Lot river. It is well preserved and as we went out from the hotel we couldn’t take our eyes of the beauty around us- the restored old houses, the carved sculptures façades, the upper floors with arches. In the center, there is a picturesque square and a building which serves as the house of Museum Champollion.  Champollion was born in 1790 in Figeac. Poor but ambitious, he stubbornly came to master oriental languages and was the first translator of Egyptian hieroglyphics written on the Rosetta Stone. The architectural design of the museum makes a tribute to the Rosetta and combines different letters on the facade in hues of gold and brown. The Museum was close and after dinner we went to see Saint Sauveur Church and then, terribly tires we went to sleep.