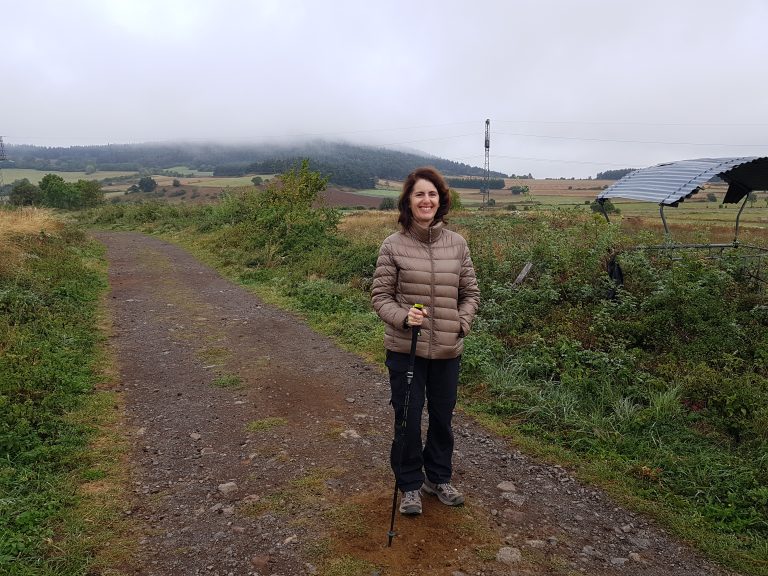 We woke up to a grey skies and cold fog. It was going to be around 19 degrees Celsius at noon but at the moment it felt like 10 degrees. We left Montbonnet behind us and followed the dirt road. Half an hour later we were climbing on the nearest mountain, walking in a forest with pines and other trees from the same family.  Since we knew that the distance from Montbonnet to Monistrol d’Allier  is only 14.5 km we allowed ourselves to walk at a leisurely pace. Grazing cows were peeking through the trees and mooing as we passed along. The slope became moderate and we found ourselves in a small village. Today we were lucky – a small coffee shop was open and we found refuge from the cold air. A friendly young woman told us that during the winter- from December and on- the village can be under a cover of snow.

We left the village and entered a different kind of forest- oaks and other unfamiliar trees threw green shadow on earth. A steep path dropped down between the trees and we carefully stepped on the huge roots. At the bottom there was a narrow stream and again we had to climb up to the village of Saint Privat d’Allier.

It was high noon and we were starving but decided to make an effort and first go to see the church. The old houses, made of dark stone, form a narrow alley that leads to the top.There, surrounded by beautiful views, stands a small church. It was build on the 12-19 centuries and serves the village. A cleaning lady was sweeping the floor and a chorus sounds were heard from hidden speakers. After a short break we descended to the village and had the best vegetable soup one could ask for. It was sunny and the skies were clear and we still had half the way ahead so we reluctantly raised up and took our backpacks. We crossed the bridge to the other side of the valley, climbed through the village to the mountain. Under a tree we saw a couple sitting for lunch. It was the Swiss couple we met the prior evening in the B&B. We stood and chat and learned that we are going to stay tonight once again in the same hotel. We proceeded together to see Rochegude chapel and impressive castle . Built in the 13 century with a shape of a turret, the castle sits on a granite rock, higher then it’s surrounding. Higher meant that now we start to descend again and indeed we hiked downhill and then on a plateau till the next village.

What seemed to be a short descent soon turned up to be a steep climbing and then a long, twisting and even steeper descent through a forest. I could only thank the weather for being so good. In heavy rain this slope can be a nightmare. A group of exhausted cyclists came up from the valley. We admired their superb fitness. This almost endless pacing between roots on a slippery dirt path put a real challenge to our tired knees and demanded concentration. At last, after hiking another kilometer, this time on the roadside, we arrived in Monistrol d’allier to Hotel Le Pain de Sucre. The hotel is being managed by Peter and Patrick. These two friendly men manage also a restaurant and prepared a great dinner for us and for the rest of the guests. We thought that while the restaurant is recommended and their service was excellent,  the hotel itself is quite run down for a two stars hotel and should be renovated.