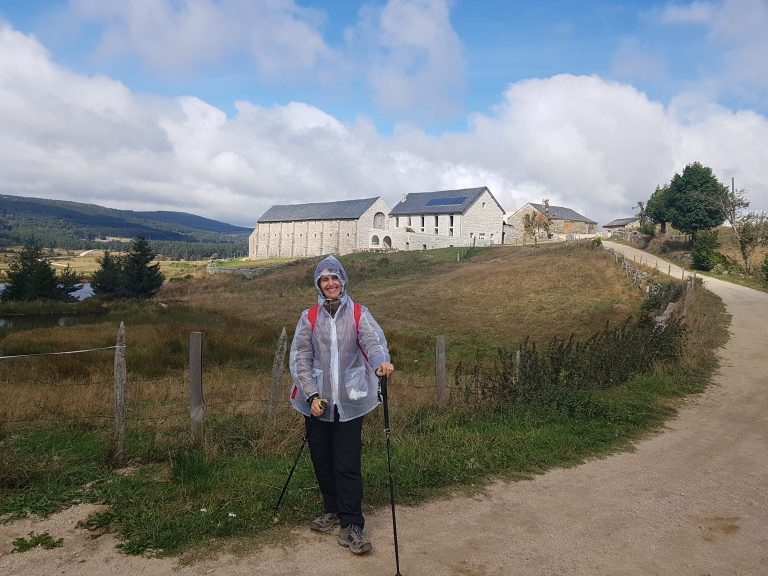 We awoke early in order to prepare our suitcase for the Malle Postale (Like a perfect Swiss clock the Malle Postale gives the most amazing service. Each day the delivery person in charge arrived at eight o’clock sharp).  After three days it was now clear that every ounce on our backs counts. We did our best to leave everything in the suitcase !!!  Once we packed I went out to put the suitcase near the door. Outside was the darkest, gloomy sky and the freezing air-five degrees Celsius. I hurried inside.  It was only during the rich breakfast that the understanding fell on me – I packed our gloves and warm hats and the suitcase had already left. Well, it was to late to cry for spilled milk. La Clauze to Les Faux is a twenty-mile walk and it will be cold. Our friends and we parted from the beautiful place and our hosts and headed for the nearest farm to collect our picnic dinner.

An advice regarding Picnic meal:

A picnic meal along Le Puy way costs 8 Euro per person. Usually we got a baguette with cheese or ham and an apple. In this price it is a bad deal. If you have the possibility to buy the day before some food (sometimes this is not a possibility because there are only a few stores on the way and the opening hours are very short)  – we found that it was better.

With our disappointing picnic meal in the backpack we passed Le Falzet and then passed Le Villeret d’Apchier and then entered into the forest. The wind kept blowing, freezing our backs. We walked as fast as possible but could not ignore the giant oaks around us,  the trunks -having variety of  shapes, and a huge, round white mushroom- even in 8 degrees Celsius the forest was fascinating. As usual the flat path soon turned into up and up…the path went up the hills and down and again up. We entered through gates into grazing lands with signs telling us to beware of the cows, and then went through another gate and left the cows behind. Around one o’clock we were starving. The wind blew vigorously but we saw a big stone table and decided to have lunch. It was a surrealistic picture -the huge table in the middle of nowhere, the trees moving in the strong wind and we, trembling, eating a baguette. A woman appeared from the forest and walked on the path. She looked at us, waved and told us something but the wind carried her words. She soon disappeared from our eyes. A few minutes later we returned to the path and followed the red and white sign. There was a curve in the path and suddenly, we saw a huge building. Now we understood that what the woman tried to tell us was that it would be better to have lunch in this farm instead of sitting in the wind.

Le Sauvage is a large isolated mountain area, on a slope of the Margeride. Approximately thousand years ago the Forest du Sauvage has been partly cleared and a fixed establishment has been installed. Currently, a group of  farmers took the activity of lodging and created a farm inn.

We entered into the warm restaurant of the lodge. Around twenty other travelers were dining and chating cheerfully. Our friends arrived and the woman that we saw a few minutes ago on the path joined our table. [Most people that we met while hiking on the Le Puy way were French. It meant that if one doesn’t speak French communication is very limited.]
After we ate the soup it was even harder to get out to the cold but we still had a long distance between us and our hotel.  We stood outside and looked at the small lake that kisses the border of the forest, the dark colored trees and the vast area that surround us – so peaceful and perfect.

The trail climbed steadily up and we followed it into the woods. From the top of the hill we could see Domain du Sauvage one more time.  The sun was stronger and we felt the warmth. Now the path was wide and the fields around us had different colors. We walked some distance on the road and reached  a fountain dedicated to Saint-Roch, the patron saint of pilgrims. Not far from the fountain there is a small church built in 1900. More climbing and climbing .At last there was the sign that indicated that we need to leave the path and go one kilometer in order to get to Les Faux. This detour was annoying but at that point there was no choice but to keep on going. At 16:30, after twenty one long kilometers we arrived our hotel. The old building had a nice facade but very simple, outdated rooms and Wifi only in the Lobby. Anyway, we were so exhausted and our muscles in such pain that we hardly made it till supper and felt happy to go to sleep immediately after we finished it. 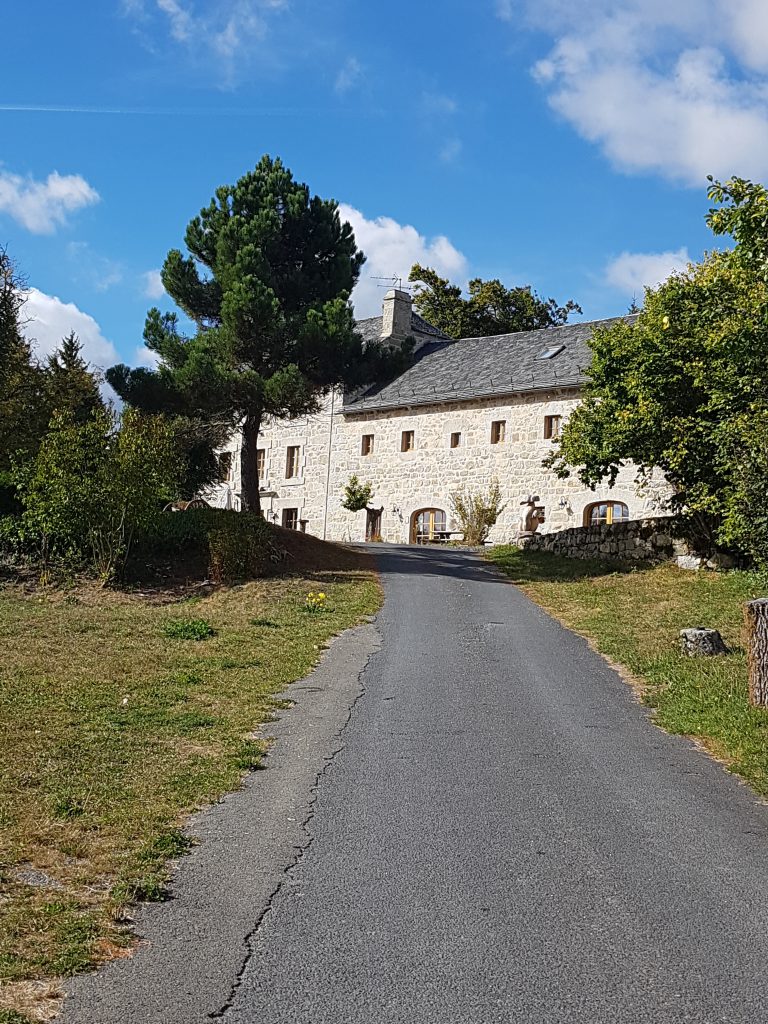