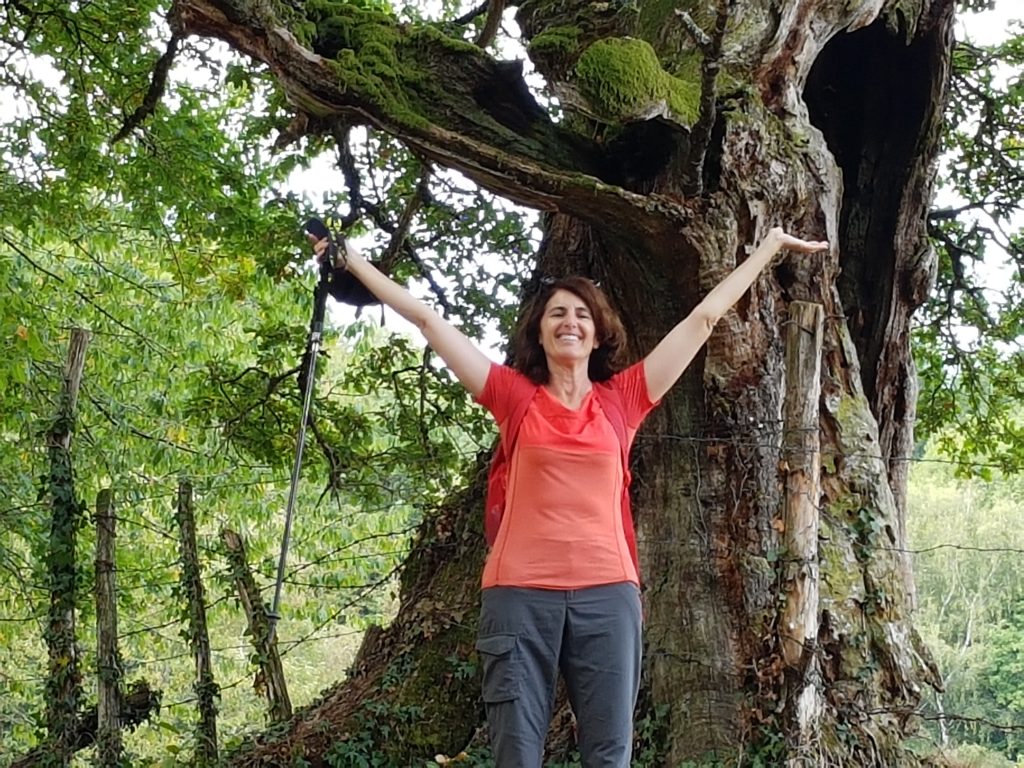 One would think that on the eleventh day we will be wiser and would carry the raincoats with us on a foggy morning – but alas..no. We woke up to a clear and cold morning … very cold … During the night I had a disturbing dream and as I was getting dressed I told Doron how in my dream I packed my warm socks and sent them by mistake with the Malle postal, and how I had to walk all day without socks. While I was telling him the dream, I quickly packed the suitcase and put it down the stairs to wait for the delivery man. We sat down to eat the delicious breakfast the landlady had prepared and then returned to the room to get dressed. It was only when I was searching for the socks that I suddenly realized that my unconscious tried through the dream to make a point  – last evening I packed the socks by mistake. A sense of light panic overtook me as I ran barefoot outside to see if the suitcase is still there. It was there!! The Malle Postal was late and I was lucky. After all I would walk the way from Golinhac to Conques with socks.

We left at nine . The sky is clear, the air is freezing … maybe 5 degrees Celsius. The exit from the village lead us up the road next to the houses. At the end of the village stands a memorial plaque with a picture of an elderly man – a resident who used to sit here for many years and talk with the pilgrims of the Camino. The road turned into a dirt path and the next hour was an easy walking along the fields.

The weather warmed a bit and we reached a tiny village named Le Soulie.  A picturesque sign and several pairs of walking shoes tied to it invited the pilgrims on the Camino to enter and enjoy free tea and water at the hostel. We decided to give up the hospitality and move on towards Espeyrac. A nice walk along the road (with signs of Shells on the sideways), then a comfortable descent brought us to a grove of trees with a stream of clean water and a small bridge. A sign beside the bridge explained that in this area were Uranium deposits and ancient mines. Today the residents of Espeyrac make a living from, among other things, the processing of local gemstones and their placement in jewelry. It was around 11:15, we walked eight kilometers and the weather seemed to change its mind again and turned windy. We felt that we deserve some coffee. Luckily we found an open bar and treated ourselves with hot drinks and opportunity to warm our frozen fingers. The walls were decorated with pictures of the group of local cyclists in various competitions. On the shelf a row of bottles of liquor, a small television broadcast a French morning program – the feeling of authenticity was powerful.

After half an hour we had no more excuses – it was time to go outside to the cold. We wrapped ourselves -coats and gloves and hats… The wind outside made it clear to us that it was going to be unpleasant. Sure enough,thirty minutes latter, after two kilometers, we were approaching to Senergues and the rain began. We stood under the huge trees and waited…and waited…and then decided to hurry up and find a real shelter. The church in Senergues was simple but warm and we spent some time inside until the rain had weakened. The streets were empty and we left the village (there is a point of water in the house near the exit) and started a steep climbing (about 150 meter to climb). At the ridge the sky looked clear again, patches of sun and fields till the horizon. We felt happy when we arrived to a small hut near the road. We set outside on a bench and decided to rest in the sun. Ten minutes of heaven and then the weather decided to show its beastly face once again. Now it rained cats and dogs, a thunder rolled and wild gusts of wind ( 45 kilometers per hour) hit our bodies.  After a few minutes along the road we decided to run to the nearest forest -but, the trees could not serve as a shelter. In less then five minutes we were soaked to the bones (and cursing ourselves for leaving our raincoats in the luggage).

An hour of walking in a frozen wind and heavy rain ended when we reached the village of Saint -Marcel. A beautiful, small songbird sat on a fence watching us as she brushed her wet feathers. A boulevard of Walnut trees led to the main street. Paved with natural gray stone the street descended toward the center of the village to a small church with a bench-it was the perfect timing for a sandwich lunch. A pleasant sun shone upon us for the next three kilometers. Around four o’clock we reached the descent leading to the village. A narrow creek covered with dripping tree tops, slippery rocks under our feet and a smell of mildew. In the next field were a number of black cows and calves lying beside them. The descent continued, a couple of women came up from the village and we congratulated ourselves on not having to go up that creek. Suddenly the muddy ground changed and stone tiles took over- we arrived Conques. A moment of enthusiasm – The pointed turrets, the gray roofs, the ancient stone houses and the wooded mountains surrounding the village – a spectacular sight. We began to descend in the alleys and look for our hotel- Le Castellou. As always, Murphy’s law worked well and as fatigue grew, it seemed that the hotel would simply never be found. Down and up and down again….we cursed…Only after another twenty minutes we found it right at the bottom of the village, near the bridge. At last!

Barbara, the owner of the hotel greeted us with a pot of steaming tea and then led us up the stairs to our room. The encounter with the room was a surprise – our room was an Indian-style room with a carpet embroidered with a large elephant, embroidered pillows and a lace curtain separating the two parts of the room. In Le Castellou the owners’ taste was dominant. While I liked the room Doron felt that he prefer a room with standard decoration . Anyway, an hour latter Barbara made a nice gesture and saved us the long climb to the center of the village. She gave us a ride to the upper parking lot and advised us to see the night show in the church. Twilight. A golden light came out of the clouds and illuminated the landscape around us. A magical hour against the background of the village. We walked towards the church, found an open inn and ate dinner. At nine o’clock, we went to the church.

The only information that we knew was that the Church of Saint Foy was a popular stop for pilgrims traveling the Way of St. James to Santiago de Compostela. The main draw for medieval pilgrims at Conques were the remains of St. Foy,a martyred during the fourth century. The present Romanesque church construction started at 1031-1065 on the setting of a 10th century basilica.  We came with lot of enthusiasm to learn more but the wind was terribly cold as we stood outside the church and the presentation of the tympanum by friar Jean-Daniel was in French, so we gave up any hope to learn more and could only stand and shiver in the cold, waiting for permission to enter inside. At last we entered and were allowed (6 Euro per person) to go to the upper-gallery of the church.

The pipe-organ was playing and the huge space was full of wonderful sounds. We climbed up the narrow staircase and suddenly found ourselves surrounding by the most amazing Romanesque capitals. We have seen many churches during our tours in Europe but here was something special. We found it hard to believe that in this small, remote place, people had built a church in such scale and unique beauty. Standing in the upper gallery, with it’s yellow stones shining in the light, felt like visiting an ancient Greek temple that floats 20 meters above the earth. We walked along the nave and the crossing and admired the pillars and the pictures curved in the stone. We would have like to stay there all night but an hour passed and we had to go out. .

Back in the windy darkness another surprise awaited us- a light show presenting in different colors the 12thcentury tympanum composing the Last Judgment and depicting the celestial Court-  the angels, the elected, the condemned and other devils come to life. It was the first time we saw such a lovely presentation of a church facade and we stood frozen but fascinated. It was a long but beautiful day and we were more than happy to return to our room, close our eyes and go to sleep.