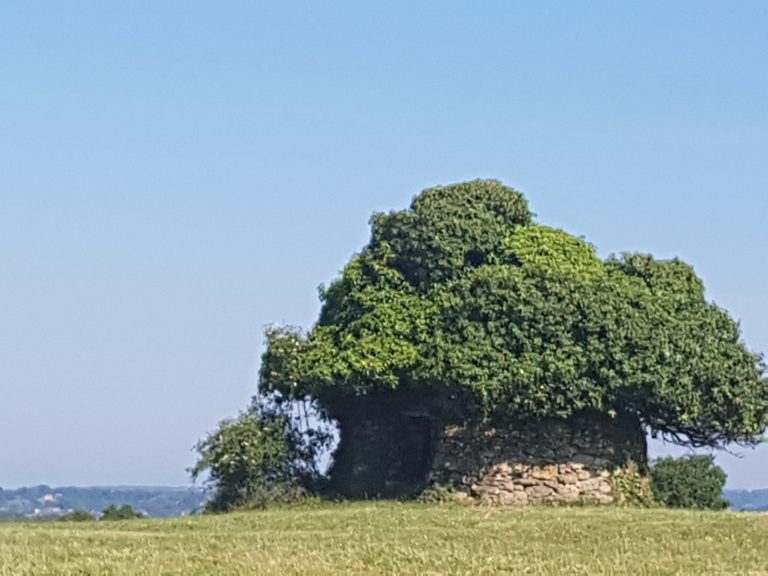 It is not always easy to change your mindset. I woke up in the morning and the knowledge that there was a long hiking today was not easy to digest. Suddenly I remembered that I had read on some blog that the section between Figeac and Beduer was not worth walking at all and would be better off. When I offered Doron the idea to skip this part ( I, the one who declared that there would be no skipping of even one meter of the Camino), he laughed and told me that we would go and be all right. That’s the beauty of being together. So we set off for the day and anticipated for 21 kilometers walk between Figeac to Saint Eulalie Espagnac.

From Figeac and up…

Easier said then done. It took us ten minutes to decide which way the GR65 goes. At last, once we crossed the bridge, we found and followed the red/white signs which took us out of town. A tiny pool of noisy toads marked the beginning of a steep rise beneath beautiful trees. Nine in the morning,the forecast promised a cool weather but the heat and the humidity were merciless and our sweat was dripping.  Half an hour later we were on a plateau, walking on a wide path. The plateau soon gave way to hills covered with trees and fields- we were in  the region of Quercy.

The road to Faycelles was beautiful and we were glad we did not give up. The village itself is beautiful, picturesque and well maintained, and at the top there is a cafe overlooking the forest landscape. Four pilgrims that we saw along the way were already sitting in the shade and apparently already preparing to continue. We sat in the balcony, had a cold beer and ice cream and the smile did not come down from our faces. What else does man need? We took off our shoes and enjoyed half an hour of pampering. At half past twelve we said good bye to the village and the way led us on the a plateau towards Beduer.

Walking through the valle cele meant leaving the GR65 trail at Beduer . It was half past one. A large sign signals that here the GR651 starts. We followed the sign and descent between trees. The walk was pleasant and in Beduer we stopped for a rest. We couldn’t fill water but we sat and watched the valley, put sunscreen and drank the last bottle of water. Not far, under a huge tree, young travelers that passed us on the way lay sunbathing in the hot sun. We proceed towards Corn. A purple and yellow bloom covered the fields along the way and crowds of butterflies fluttered in the air. A grove of trees provides a pleasant shade from time to time and at some point, on the side of the trail, spring water were dripping and the background noise was soothing.

At about three o’clock we descended from the mountain to Corn. The heat was annoying and the sight of the quiet river flowing through the trees gave a relief. Unbelievable – three o’clock in France and there is an open restaurant. That felt like a miracle.We hurried in and sat on the balcony above the river. After an omelet and a cold drink, we had a short conversation with the owner in my stuttering French. Only then we reluctantly realized that we had another 4 kilometers to go to our B&B in Saint Eulalie Espagnac.  “It’s an easy route”, she said cheerfully. Apparently something in my calculations was wrong, the length of the route I planned was 21 kilometers, but in practice it turns out that the distance is 25 kilometers.

A four kilometers walk sounds like a task that is not too difficult but believe me – at four o’clock, at the height of the heat, the pleasure was small. While at the beginning of the trail we were protected under the shade of trees, the trail quickly changed its character and climbed upward, fully exposed to the sun. Well, every climb has got to end. Around half past five we saw a few houses. It was the village of Sainte Eulalie and our B&B, Les Anons du Célé.

Enza and Paul welcomed us warmly. The house was full of guest and Paul took us into our room-a cute room with a wooden ceiling and a door that led to the big courtyard. Once alone and after a shower it was time to start the celebrations. Doron was not aware that I was going to start the celebration of his sixtieth birthday already here. From home I brought a lot of surprises with me, and today he would see the first . In the bathroom I inflated  red balloons with the logo I had designed with the help of a friend for our Camino. With these I went out of the bathroom – he burst out laughing and enjoyed the idea of the logo. From now on, the logo will accompany us on our shirt, backpack, and later on you’ll find out where else. An hour later we gathered together. There was a French couple that meant to walk only for a few days, two French women that were on their way to Santiago, Paul and Enza. An excellent aperitif loosened the tongues and we all tried to converse with the little common language we had. Enza cooked a wonderful meal and when the last course was served we were so full and exhausted that we barely kept our eyes open.Everyone went upstairs to sleep while I stayed on the phone with the kids (the Internet in the room was too weak to be helpful). When I got into bed half an hour later, Doron was asleep. It was a long day.