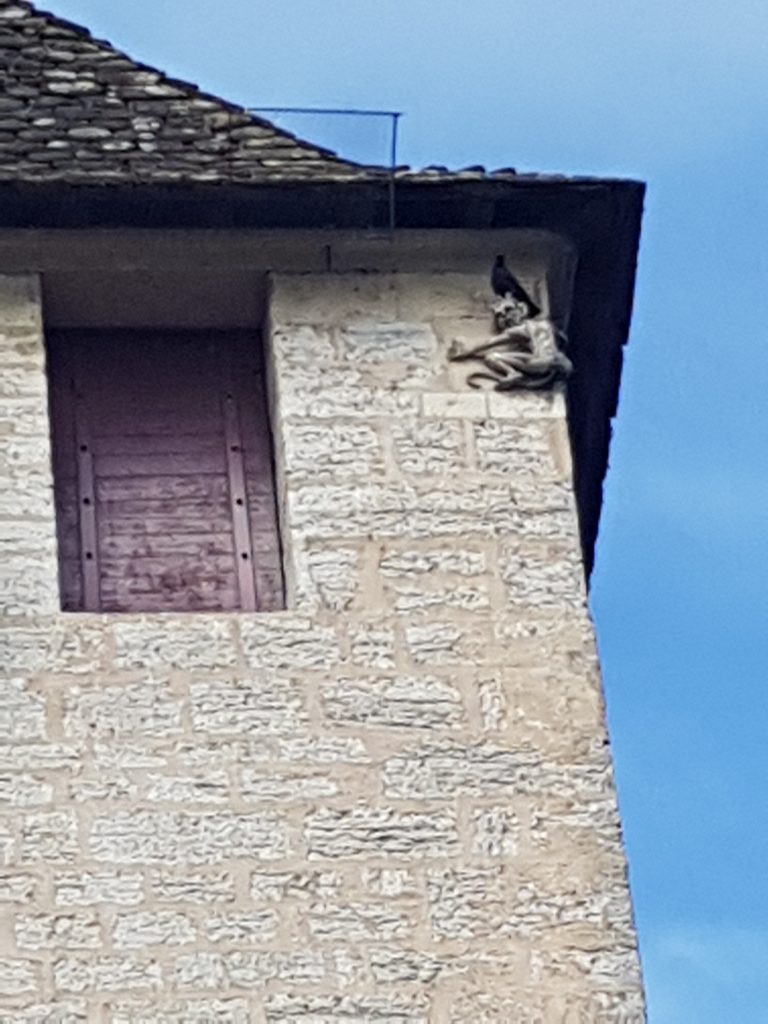 We started the morning at a leisurely pace. Knowing that there are only 16 kilometers of walking allowed us to enjoy the sumptuous breakfast and relax for more enjoyable moments in front of the river.At quarter to eleven we crossed the bridge and waved goodbye to the devil on the tower. On the other side of the bridge we turned onto the path(GR65). Preparing ourselves for an exhausting and steep climb of one kilometer to the cross, we were surprised to see that after relatively easy 25 minutes we were already near the Croix de Magne. The view of Cahors and the Lot was magnificent. The wind was blowing and a light rain began -time to move on.

From the moment the rain began, it continues unceasingly. The path was comfortable and pale blue butterflies escorted us as they flew from one yellow flower to another. At La Roziere a signed informed that the GR65 changed it course and a map indicated the direction of the old and the new path. The path descended gently among the trees and led to the road. We crossed to the other side and the trail led up the hill to the village of Labastide. We sought refuge from the rain and found a restaurant with a grocery store . We sat down for hot coffee and cake. Near the restaurant there was a hairdresser and the place seemed to be full of life. Doron,indifferent to possible consequences, suggested that we’ll both go there and ask for a haircut. I, in a more apprehensive state of mind, suggested to postpone the decision for another day. As soon as we left the village a heavy rain accompanied by lightning and strong winds began. In a minute we were wet and the ground was muddy. We found a shelter behind a huge Cypress tree and put our rain suits on. Around us the blossom of poppies color everything in fiery red.

Half an hour later the weather became warmer. Trigodina farm was hiding just around the corner – two buildings, nice garden and peaceful surrounding. Trigodina used to be a farm but was turned into a gite for pilgrims on Le Puy route. Remy, the owner, welcomed us. The gite was already full and we got a nice double room  upstairs. Remy’s two friendly dog insisted on playing with us for the next hour and it was only at dinner that they had to leave us and stay outside. There was a  multi national gathering around the table: two French women, a Japanese man, a wife, husband and his sister from South Africa and us. It was nice to chat in English. After dinner Remy played the piano with lot of talent and one of the women sang with him. We felt that Remy gave us a really special present. Being together in such an occasion with other fellow hikers was a joy . We went happy and tired to our beds.