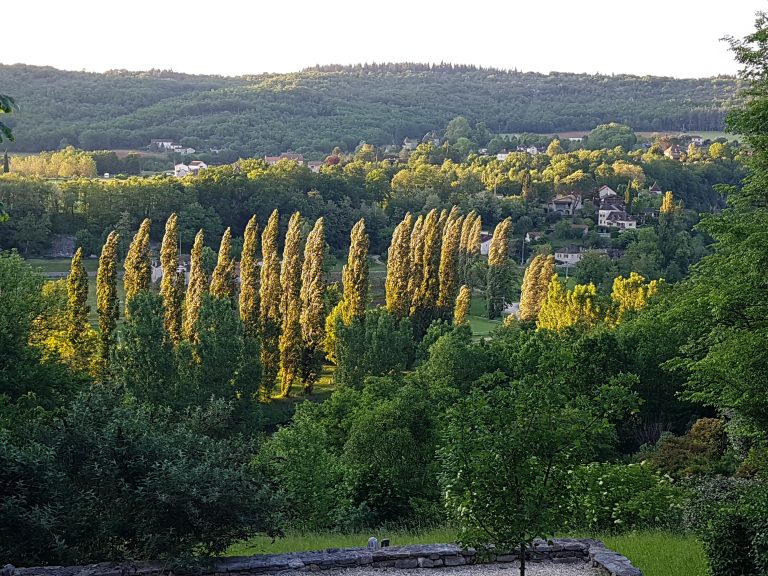 Pech Merle cave is on the ridge above Cabrerets. Our tickets were booked for 09:45 and that meant a late wake up. Cathy prepared a pampering breakfast. We set in her dining room and enjoyed the conversation and the view. At nine o’clock we were on our way. The GR651 took us through the village and up the mountain. It was a short and steep climb. In the middle of the ascent we stopped to rest and enjoyed the sight of Cabrerets. Twenty minutes later we were at the entrance of Pech Merle.

The prehistoric galleries of Pech Merle were discovered in 1922 by three children from Cabrerets. In 1926 it was open to the public. There are paintings of animals – mammoth is the most frequently represented animal, then there is a bear which looks very realistic and beautiful. We couldn’t take our eyes from the painting of the spotted horses dating back 29,000 years. The movement, perspective and color of these horses were magnificent. The tour was in French but we got some written explanations that were helpful and we enjoyed. At 11:00,  we continued uphill. Large signs along the way gave explanations (in French) about the geology and the history of the earth.

Pleasant walk on the ridge and a moderate decline brought us to the road.  Across the road a railway bridge and on it’s side a huge sign with a mark in -red-white- red. For a moment we thought that the GR is going on the bridge. A moment later it was clear that this warning sign is for the boats in the river and we should simply follow the road to Cahors. About ten minutes of road walking by the side of the Lot river and we saw the bridge that leads to Bouzies. Just above the road, on the cliff, another Chateau des Anglais, similar to the one we saw in Cabrerets. Here, again the fortress dominates the river and the bridge. A few pictures and we crossed the Lot and entered the village of Bouzies. It seems that in summer the village serves as a vacation spot for families, but now everything was quiet. We sat down on the balcony of a hotel overlooking the river and enjoyed a luscious, cholesterol-laden lunch.

In the entrance to Bouzies the sign indicates that here is the crossroads of Gr36-Gr46 and GR651 . Since we decided that we want to see the beautiful village of Saint Cirq Lapopie , turned to the GR36 and headed to the starting point of  Chemin des halage, “the towpath”. A path carved  in the cliff which allows to reach St-Cirq-Lapopie, 4 km away. Between the village and the Chemin des halage  there’s abeautiful green park with impressive sculptures that reflect the history of the area. We particularly liked the giant mammoth made of iron. Walking in the open stone channel, a meter above the water, was a delightful walk. Tall trees around and quiet green water on our side created a peaceful atmosphere. In the middle of the towpath the stone is carved by Daniel Monnier.  This 40*2 m work of art started on 1985 and was eventually completed four years later.It is hidden in the rock and only by passing that one can enjoy it.

Once we left the chemin des halage the path passed through the fringes of green barley fields. The Lot continued to flow on our side in broad curves. At two o’clock the sun was hot and knowing that we were about to arrive our B&B  pleased us. But at three o’clock, We stood at the feet of the village (which looked impressive 150 m above us) and realized that there were two and a half kilometers to the neighboring village before we could freshen up. A few moments of distress. It seemed that the short day (we planed 16 km) became longer than expected.We kept walking, crossed the river and the train tracks and arrived to Tour de Faure. We found our B&B , Maison de’hotes Redon, and were happy to see that it’s a lovely old farmhouse.

Around 18:30 our hostess was kind and in order to save us the need to climb, she took us to Saint Cirq Lapopie. The road winds in sharp curves to the top and reveals the beauty of the picturesque, medieval village that stands on a rock, 150 m above the Lot. From the top, one sees an amazing panoramic view of the whole valley. We wandered between the well preserved houses dating from the twelfth to the fifteenth century. Well-tended stores that used to be the place of boilermakers and craftsman were  exhibiting tempting food products or artworks made of wood, steel and clay. Most of the year the village is empty, with a handful of people that lives there. Like a play on a stage, only during the summer the village gets back to life. May is still out of season and there were relatively not many tourists.  We had dinner in one of the restaurants and later, the sun almost disappeared we started to descent along the road. We had to walk 2.5 km back to our B&B. All in all we walked 21km today and signals of pain in my back screamed -“let me have a rest”. I was grateful when we finally turned off the lights in our room.