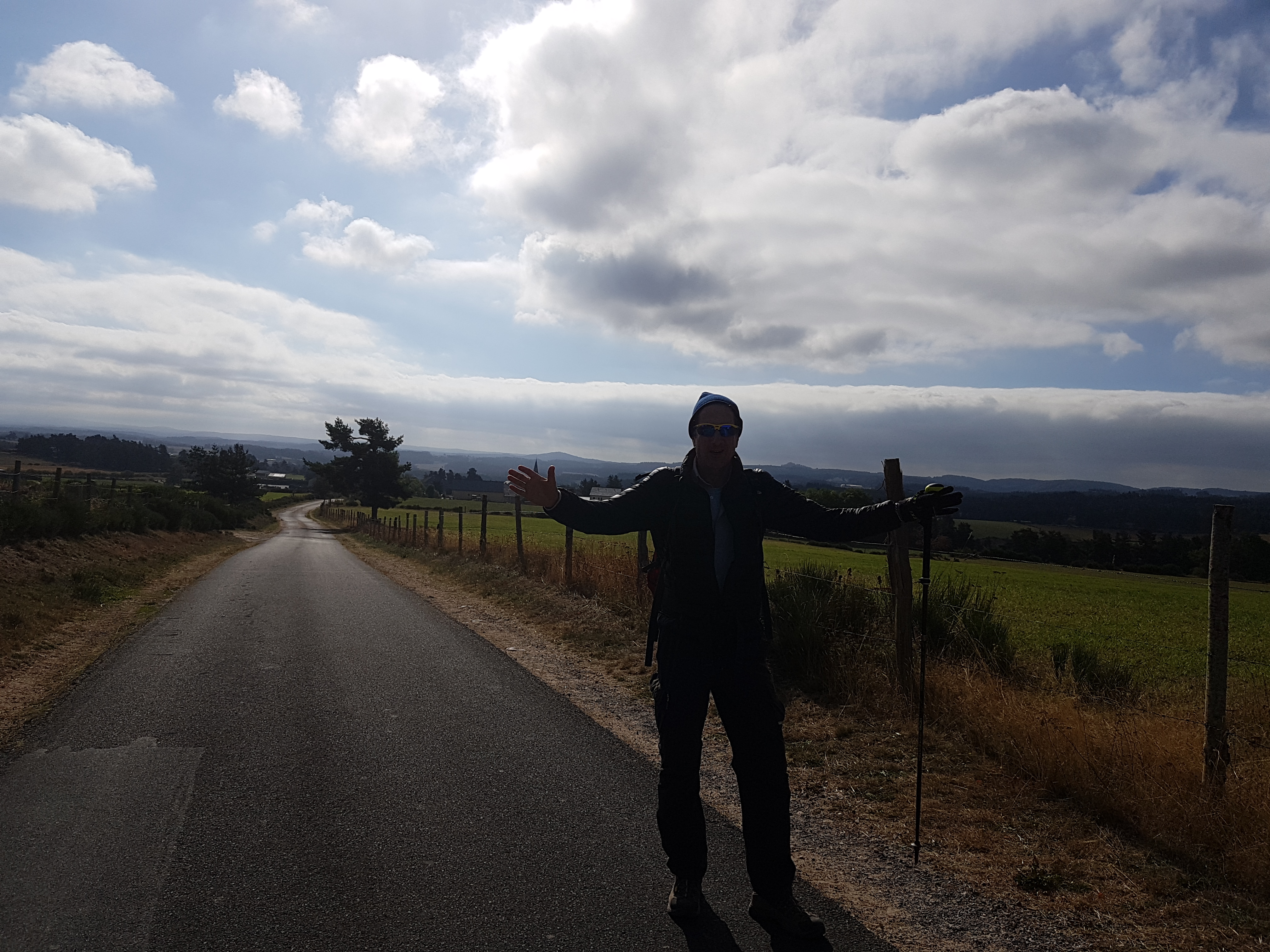 After last night’s dinner we slept deeply. The bed was comfortable, the shower clean and strong and it was at eight o’clock that we waked up. Blue skies, cold air -it seemed that it’s going to be a perfect day. We decided to stop purchasing picnic meals and headed back to the center in search for a bakery. The first one was close but luckily another was open and we bought two cheese sandwiches and a cake for the day. In the nearest bar we drank a strong coffee and now we felt ready to go. The Gr65 passes through the center, then leaves through the back streets, aside the rail tracks and then climbs up the hill. There are 26 kilometers from Aumont -Aubrac to Nasbinal and because we were going to stay in a B&B in La Grange des Enfants we expected to hike only 21 kilometers and felt a relief. During the next three hours, in what seemed now as a routine, we climbed up and down. On the six day we continued to admire the rich landscape, the endless shades of green – bushes, deciduous trees, evergreens, fields with crops. After 5 kilometers we made a brief ‘cake break’ at La Chaze de Peyre. We set near the church, refilled our bottles with water (There are clean toilets) and kept on our way. The next village was Lasbros with another point one can fill water.1

As if by magic, as soon as we arrived Les Quatre- Chemins the landscape changed and yellow fields surrounded us. We entered the Aubrac plateau. The plateau extends over an area of around 1000 square kilometers, part of it volcanic and part of it formed of granite. On the previous days we heard a lot about the vast plateau but now, as we followed  the narrow path, we felt as if we know this landscape from home. The vast area, the cattle, the high yellow grass that kept moving in the wind… all was so similar to the landscape of the Golan heights in Israel. The wind was blowing and the sun was beating. In the morning we dressed up with suitable clothing for 11 degrees but now the temperature was around 19 degrees and it felt hot. Here and there was a small creek with green banks or a huge granite rock, but other than that our eyes saw only fields stretching till the horizon.

We are getting tired…

After two hours in this open landscape something happened to our mood. Doron was bored with the monotonous hiking and felt that it is too much like the landscape we have at home. I loved the clean, vast plateau but felt physically tired. I tried to keep up with Doron’s fast pace and became grumpy. Around 15:00 we stopped in a small village with beautifully restored farmhouses. It was Rieutort d’aubrac.  We set on a fence near the cemetery when a shinning Porsche appeared from nowhere and parked. It seemed so out of context that we started to laugh. The laughter restored our good spirits and we were ready to go.
The GR 65 was now following the road. Signs with picture of  pilgrim appeared with warning to the drivers to drive carefully. Two farmers were gathering their’s cows, leading them on the road and into a pen. We stood and watched, appreciating their skill. Soon enough we were walking again in the empty plains that were dotted only with huge granite rocks.

The last 4 kilometers were easy. On our right was a nice stream, two vultures appeared in the sky, and at last we came to some stone bridge. The sign directed us to the left- one more kilometer and here was La Grange des enfants.
We did not expect to find ourselves in such an amazing B&B. La Borie de l´Aubrac is a renovated house with five rooms of great comfort and beautiful views overlooking the high plain of   l´Aubrac. Our room was so cozy that it was like falling into heaven. The Mouliade family greeted us with warmth and  borrowed us their’s car so that we would be able to drive a few kilometers and dine in Nasbinals. After a warm bath we gained a clean, better appearance and drove to town. We enjoyed dinner near  in a local restaurant the church and on our way back had the most enormous and bright moon in the sky.